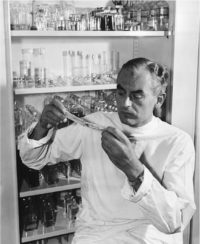 Sir Peter Brian Medawar (28 February 1915 – 2 October 1987) Born in Brazil with British nationality, Peter Medawar was the second child of Lebanese Nicholas Agnatius Medawar, born in the village of Jounieh, Lebanon. He studied zoology and science in England, taking on many research and lecturing roles. His work on graft rejection and the discovery of acquired immune tolerance was fundamental to the practice of tissue and organ transplants. For his works in immunology he is regarded as the “father of transplantation”. This became the foundation of tissue and organ transplantation. Along with the Australian virologist, Sir Frank Macfarlane Burnet, he received the 1960 Nobel Prize in Physiology or Medicine “for discovery of acquired immunological tolerance”. He is remembered for his wit in real life and popular writings. Famous zoologists such as Richard Dawkins referred to him as “the wittiest of all scientific writers”, and Stephen Jay Gould as “the cleverest man I have ever known”. New Scientist magazine’s obituary called him “perhaps the best science writer of his generation”. He was also awarded the 1987 Michael Faraday Prize “for the contribution his books had made in presenting to the public, and to scientists themselves, the intellectual nature and the essential humanity of pursuing science at the highest level and the part it played in our modern culture”. He is the author of numerous books and the recipient of countless awards and medals.