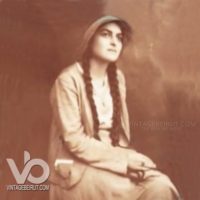 26 June 1913 – 14 January 2016 – Lebanese feminist, women and human rights activist. Anissa Rawda (also – Raouda or Rawdah) was born in Beirut, the daughter of Salim Anis Rawda and Zalfa Amine Najjar. Her younger sister Saloua (Salwa) Raouda Choucair became a noted painter and sculptor. She was educated at the Beirut College for Women and at the American University of Beirut, where she completed her studies in sociology and education in 1936.

Najjar’s activism focused on rural development and women’s lives. She worked for the establishment of schools and clinics accessible to rural families. In 1953 she and Evelyne Bustros founded the Village Welfare Society  (Jam`iyat In`ash Al-Qarya), to advance literacy and economic opportunities for rural women in Lebanon. She created a certificate, the “Rural Brevet”, as an incentive for women to attend the society’s practical workshops on literacy, childcare, nutrition, hygiene, and agriculture; the program soon expanded to include some content on broader topics such as literature, politics, music, and religion. In her schools, Anissa incorporated her book, Literacy of the Mind, in the curriculum to empower graduates with both educational and social skill. She also established a number of clinics and schools ‎and sought to set up a rural institute that educates women (Madrasat Al Maraa Al Masoula). ‎Najjar has been one of the earliest Arab women journalists where she published and wrote in ‘Al ‎Ahliyah’ newsletter back in 1931 when she was still a student. In 1963 she was appointed editor ‎in chief of ‘Al 3urwa Al Wuthqa’ magazine.

Outside of Lebanon, for five years during World War II, she was principal of two girls’ schools in Iraq. She was a frequent delegate to international conferences on women, including UNESCO events, representing Lebanese women. In 1963, Anissa founded Women’s International League for Peace and Freedom (WILPF) Lebanon and became its first president. She was also elected as Vice-President of the International Executive Committee in 1977 and 1983. She attended the Third World Conference on Women in 1985, in Nairobi, and the Fourth World Conference on Women in 1995, in Beijing.

A Lebanese postage stamp featuring Najjar’s face and name was issued in 2014, soon after her 100th birthday. She was also awarded the Lebanese Order of Merit medal, twice, and the Lebanese Army Shield.

In 1944 she married agronomist Foaud Amine Najjar, who became Minister of Agriculture in 1959. They had three children, all of whom became agricultural engineers in adulthood. She was widowed in 1992 when Fouad died in a car accident.