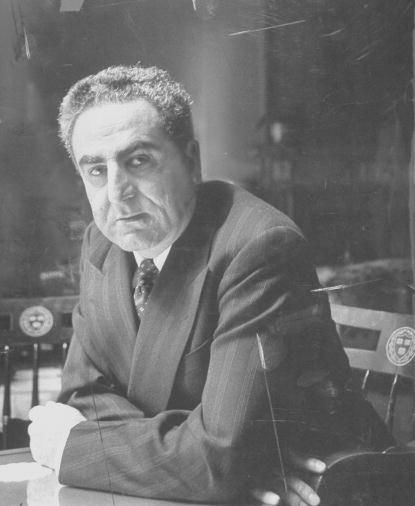 Charles Malik  (Arabic: شارل مالك‎) (1906 –  28 December, 1987) was a Lebanese academic, activist, politician, diplomat, philosopher and writer. Born in Btourram, Lebanon, Malik was the son of Dr. Habib Malik and Zarifa Karam. He was the great-nephew of the renowned author Farah Antun. Malik was educated at the American Mission School for Boys (now Tripoli Evangelical School for Girls and Boys) and the American University of Beirut, where he graduated with a degree in mathematics and physics. He moved on to Cairo in 1929, where he developed an interest in philosophy, which he proceeded to study at Harvard and in Freiburg, Germany in 1932. His stay in Germany was short-lived – he found the policies of the Nazis unfavorable, and left soon after they came to power in 1933. In 1937, he received his Ph.D. in philosophy from Harvard University. He taught there as well as at other universities in the United States. After returning to Lebanon, Malik founded the Philosophy Department at the AUB, as well as a cultural studies program. He remained in this capacity until 1945 when he was appointed to be the Lebanese Ambassador to the United States and the United Nations. Malik represented Lebanon at the San Francisco conference at which the United Nations was founded. He served as a rapporteur for the Commission on Human Rights in 1947 and 1948, when he became President of the Economic and Social Council. The same year, he helped to draft the Universal Declaration of Human Rights with Chair and President of the Human Rights Commission, U.S. Delegate to the U.N. General Assembly, Eleanor Roosevelt. He succeeded Mrs. Roosevelt as the Human Rights Commission’s Chair. He remained as ambassador to the US and UN until 1955. He was an outspoken participant in debates in the United Nations General Assembly and often criticized the Soviet Union. After a three-year absence, he returned in 1958 to preside over the thirteenth session of the United Nations General Assembly. Malik was also appointed to the Lebanese Cabinet. He was Minister of National Education and Fine Arts in 1956 and 1957, and Minister of Foreign Affairs from 1956 to 1958. While a Minister, he was elected to the National Assembly in 1957, and served there for three years. Charles Malik returned to his academic career in 1960. He traveled extensively, lectured on human rights and other subjects, and held professorships at a number of American universities including Harvard, the American University in Washington, DC, Dartmouth College (New Hampshire), University of Notre Dame (Indiana). In 1981, he was also a Pascal Lecturer at the University of Waterloo in Canada. He also returned to his old chair in Philosophy at the American University of Beirut (1962 to 1976) and was appointed Dean of Graduate Studies. Malik has been awarded a world record of 50 honorary degrees; the originals are in his archives in Notre Dame University, Lebanon.