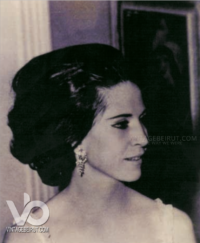 Yvonne, Lady Cochrane Sursock is the daughter of Alfred Bey Sursock, a Levantine aristocrat who came to Lebanon from Turkey at the beginning of the twentieth century, and Donna Maria Theresa Serra diCassano, daughter of Francesco Serra, seventh Duke of Casino. She was born in Naples and arrived in Beirut at one month of age.

She is the wife of Sir Desmond Cochrane, Ireland’s first ambassador in the Middle East, whom she married in 1946. She has played an active public role in Lebanon since her young adulthood, particularly in the arts. She was president of the committee and general manager of the Nicolas Sursock Museum in Beirut (1960–1966) and founder and president of the Association for the Protection of the Natural Sites and Ancient Buildings (APSAD; Association pour la protection des sites et anciennes demeures) in Lebanon (1960–2002). She has been constantly involved in projects to stem the exodus of Lebanese by rerooting them in their villages of origin and creating jobs in the fields of agriculture, textiles, and handcrafts. Lady Cochrane has been a pioneer in the protection of the environment and in developing Lebanese citizens’ awareness of the unique architectural and cultural heritage of Lebanon.