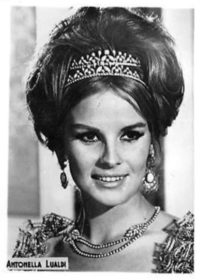 Antonella Lualdi (6 July 1931 – ) Born Antonietta De Pascale, in Beirut, Lebanon to an Italian father and Greek mother, of Turkish origin. At the age of 10, at the beginning of World War 2, the family left Lebanon to settle in Milan. She grew up fluent in Arabic, French and Italian. As a student in Florence, she worked as a model and in the theatre.  She began her career in 1949, after having won a contest for new talents of the cinema magazine Hollywood, in which she was presented as “Signorina X” (“Madam X”), inviting the readers to choose her stage name. At the dawn of the 1950s, when she was not yet 20 years old, she made her film debut by taking part in the shooting of three feature films.