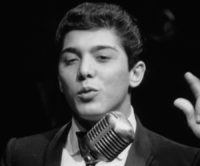 Paul Anka was born in Ottawa 30 July 1941 to parents of Syrian and Lebanese descent – Camelia (née Tannis) and Andrew Emile “Andy” Anka Sr., who owned a restaurant called the Locanda. Anka’s father (Andy) was Syrian-Canadian from ‘Uyūn al-Wādī, Syria, from the Na’Nou’ (Arabic: نعنوع) family and his mother (Camelia) was Lebanese-Canadian from the town of Kfar Mechki, Rashaya District, in Lebanon. She died when he was 18.

He told LIFE that the Arabic music that flowed through his home was one of his earliest musical influences. After performing with friends around town, he began playing country clubs at 14, recorded a few singles and got increasing play on Canadian radio. When a local disc jockey called his father to tell him, “your boy Paul is too big for Canada,” they went to New York to launch a full-scale operation on the American front.

As a 1960 LIFE magazine profile titled “Paul Anka, Kids’ Wonder Singer” put it, the 19-year-old had “the look of a small boy trying to become a grownup.” To demonstrate this point, the article described a shopping trip in New York during which Anka purchased a platinum watch from Tiffany’s before buying a haul of toys from F.A.O. Schwartz.

Anka’s music—which featured his smooth voice, backed by violins, singing about puppy love and goodnight kisses—was “admired by teen-agers but almost unknown to oldtimers over 20.” And his young fans’ appetite for it was voracious. “The girls threw their panties on the stage,” Anka told LIFE of one 1958 show. For a show in Japan, 2,000 fans spent a day standing outside in a typhoon waiting to buy standing room only tickets.

But the life of a teen idol can be surprisingly lonely, and Anka, who wrote his own music, occasionally worked these darker feelings into his songs. He later explained that his hit “Lonely Boy” stemmed from the isolation of traveling amidst a sea of adoring fans whom he never got close to. Similarly, “Put Your Head On My Shoulder” was inspired by looking out at a sea of teens canoodling at his concerts and then going to his hotel room to eat dinner alone.
The transition from teen heartthrob to adult entertainer is rarely seamless, and it proved difficult for Anka. Though he began performing in adult clubs like the Copacabana, this led to a drop-off in interest from teens, which was not fully replaced by adult record sales. A writer and composer above all, Anka was able to fall back on these skills as his bread and butter when the girls stopped throwing their panties. He penned tunes for Buddy Holly and Connie Francis, and later co-wrote Michael Jackson’s “This Is It,” released after Jackson’s death.

Anka became famous with hit songs like “Diana”, “Lonely Boy”, “Put Your Head on My Shoulder”, and “(You’re) Having My Baby”. He wrote such well-known music as the theme for The Tonight Show Starring Johnny Carson and one of Tom Jones’s biggest hits, “She’s a Lady”. He also wrote the English lyrics to Claude François and Jacques Revaux’s music for Frank Sinatra’s signature song, “My Way”, which has been covered by many, including Elvis Presley.
In 1983, he co-wrote the song “I Never Heard” with Michael Jackson. It was retitled and released in 2009 under the name “This Is It”. An additional song that Jackson co-wrote with Anka from the 1983 session, “Love Never Felt So Good”, was released in 2014 on Jackson’s posthumous album Xscape. The song was also released by Johnny Mathis in 1984.

Paul Anka recorded his first single, “I Confess”, when he was 14. In 1957, with $100 given to him by his uncle, he went to New York City where he auditioned for Don Costa at ABC, singing what was widely believed to be a lovestruck verse he had written to a former babysitter. In an interview with NPR’s Terry Gross in 2005, he stated that it was to a girl at his church whom he hardly knew. The song “Diana” brought Anka stardom as it rocketed to No. 1 on the Canadian and US music charts. “Diana” is one of the best selling singles ever by a Canadian recording artist. He followed up with four songs that made it into the Top 20 in 1958, including “It’s Time to Cry”, which hit No. 4 and “(All Of a Sudden) My Heart Sings”, which reached No. 15, making him (at 17) one of the biggest teen idols of the time. He toured Britain, then Australia with Buddy Holly. Anka also wrote “It Doesn’t Matter Anymore” – a song written for Holly, which Holly recorded just before he died in 1959. Anka stated shortly afterward:
“It Doesn’t Matter Anymore” has a tragic irony about it now, but at least it will help look after Buddy Holly’s family. I’m giving my composer’s royalty to his widow – it’s the least I can do.”

Paul Anka’s talent included the theme for The Tonight Show Starring Johnny Carson (reworked in 1962 from a song Anka wrote earlier called “Toot Sweet”; it had been rewritten with lyrics and recorded by Annette Funicello in 1959 as ” It’s Really Love “).[13] He wrote “Teddy” – a Top 20 hit for Connie Francis in 1960. Anka composed Tom Jones’s biggest hit record, “She’s a Lady”, and wrote the English lyrics to “My Way”, Frank Sinatra’s signature song (originally the French song “Comme d’habitude”). In the 1960s, Anka began acting in motion pictures as well as writing songs for them, most notably the theme for the hit film The Longest Day (which also was the official march of the Canadian Airborne Regiment), in which he made a cameo appearance as a US Army Ranger. For his film work he wrote and recorded one of his greatest hits, “Lonely Boy”. He also wrote and recorded “My Home Town”, which was a No. 8 pop hit for him the same year. He then went on to become one of the first pop singers to perform at the Las Vegas casinos. In 1960, he appeared twice as himself in NBC’s short-lived crime drama Dan Raven.
In 1960, Anka signed with RCA Victor. He bought the rights and ownership of his ABC-Paramount catalog in 1963, but like most North American recording artists saw his career stalled by the British Invasion. By the late 1960s, his career focused on adult contemporary and big-band standards, played regularly in Las Vegas.
In the early 1970s, he signed with Buddah Records, putting out two albums, a self-titled and Jubilation. The former, first released in 1971, bore the track “She’s a Lady”, a song he wrote that would become a signature hit for Welsh singer Tom Jones that same year. Anka failed to make a chart success of his own version.

Frustrated after more than ten years without a top 25 hit record, Anka switched labels again, which marked a turning point in his career. This time he signed with United Artists and in 1974 teamed up with Odia Coates to record the No. 1 hit, “(You’re) Having My Baby”, exposing Anka to a new generation of fans and proved his staying power among his original fan base that was now maturing.
Anka also wrote five songs which were included on an album by Don Goodwin.
Anka and Coates would record two more duets that made it into the Top 10, “One Man Woman/One Woman Man” (No. 7) and “I Don’t Like to Sleep Alone” (No. 8), and the No. 15 duet “(I Believe) There’s Nothing Stronger Than Our Love”. In 1975 he recorded a jingle for Kodak written by Bill Lane (lyrics) and Roger Nichols (melody) called “Times of Your Life”. It became so popular Anka recorded it as a full song, which peaked at No. 7 in the US pop chart in 1976. The follow-up was another hit that Anka wrote for Sinatra, “Anytime (I’ll Be There)”, peaking at No. 33. Anka’s last Top 40 hit in the US was in the summer of 1983: “Hold Me ‘Til the Mornin’ Comes”, which included backing vocals from then-Chicago frontman Peter Cetera; it hit No. 2 on the Hot Adult Contemporary chart.

Anka was married to Anne de Zogheb, the daughter of a Lebanese diplomat, Charles de Zogheb, from February 16, 1963, until 2001. The couple met in 1962 in San Juan, Puerto Rico, where she was a fashion model on assignment and under contract to the Eileen Ford Agency. Zogheb, brought up in Egypt, is of Lebanese, English, French, Dutch, and Greek descent. The couple married the following year in a ceremony at Paris-Orly Airport. She quit modelling after their second child was born. They have five daughters: Amelia, Anthea, Alicia, Amanda (married to actor Jason Bateman), and Alexandra.
In 2008, Anka married his personal trainer, Anna Åberg, in Sardinia. They divorced in 2010 and Paul has full custody of their son. Anna was featured in the Swedish TV3 show Svenska Hollywoodfruar (Swedish Hollywood wives).
In October 2016 Anka married Lisa Pemberton in Beverly Hills, California.
On September 6, 1990, he became a naturalized citizen of the United States.
Anka’s autobiography, My Way, co-written with David Dalton, was published in 2013.