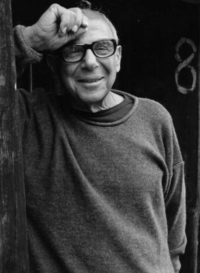 Sam Maloof (24 January, 1916 – 21 May, 2009). Maloof was born Samuel Solomon Maloof, in Chino, California, to Lebanese immigrants. Maloof’s father, Slimen Nasif Nadir Maloof, and mother, Anisse, immigrated to the U.S. in 1905 from Lebanon. An internationally- renowned furniture designer and woodworker, Maloof was the first craftsman to receive a MacArthur fellowship. Maloof’s work is in the collections of several major American museums, including the Metropolitan Museum of Art, the Los Angeles County Museum of Art, the Philadelphia Museum of Art, and the Smithsonian American Art Museum. He was described by the N.Y. Times as “a central figure in the postwar American crafts movement”. In 1985 he was awarded a MacArthur “Genius” fellowship – the first craftsman to receive such a grant. Despite such recognition, he declined to identify himself as an artist. His autobiography was titled Sam Maloof: Woodworker. His furniture is owned by Presidents Jimmy Carter and Ronald Reagan, and many luminaries including Ray Charles.