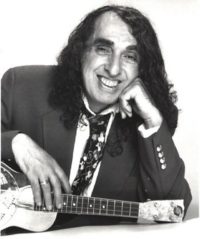 Tiny Tim (12 April, 1932 – 30 November, 1996) Herbert Buckingham Khoury was the son of Butros Khoury, a textile worker from Beirut, Lebanon who emigrated to Manhattan, New York City. Known professionally as Tiny Tim (he was 185cm tall), the American singer was famous for his ukulele. He is best remembered for his cover hits “Tiptoe Through the Tulips” and “Livin’ in the Sunlight, Lovin’ in the Moonlight” which he sung in his trademark high falsetto/vibrato voice. In 1968, his first album God Bless Tiny Tim was released. It contained an orchestrated version of “Tiptoe Through the Tulips”, which became a hit after being released as a single. For All My Little Friends (1969) was a collection of children’s songs and was nominated for a Grammy Award. He made many appearances on stage, television and in films, often wearing crazy clothing and makeup.