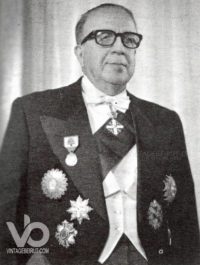 Melhem Ibrahim Talhouk (1908 – ?) Born in Aley, Mount Lebanon, he studied law and graduated in 1932, and continued studying and teaching law for a further nine years.

In 1941, under the presidency of Alfred Naccache, he was appointed Head of the High Court. He retained this position until 1945.

In 1950, he was appointed by the Lebanese government as the first ambassador in Brazil. He later served as an advisor to the Lebanese Embassy in Madrid, where he stayed for two years. He went on to become Ambassador to Colombia, Ecuador, Bolivia and Peru.

IN 1966, he was appointed head of the Department of Education in Lebanon, and signed two agreements with Italy and Belgium in 1972.

He was awarded Badges of Honour in many countries, including Lebanon, Colombia, Peru, Belgium and Italy.

On 1 September 1985, he released a book documenting the history and heritage of the Talhouk family in Lebanon.