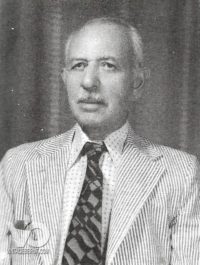 The first entomologist in Lebanon to take a close interest in the life of insects, his work has become an essential reference for his colleagues in America, Europe and the Middle East.

This great love story with butterflies, moths and assorted insects began in 1933, when he met Halim Najjar, who was later to become general director of the Ministry of Agriculture during the 1960s. He introduced him to collecting insects by giving him a gift – some bug-collecting pins that he himself used as an amateur. At age 19, the young man, keenly interested in agronomic and entomological sciences, began his studies at a technical school in Taalbaya and began to feed his ambitions as a collector.

This native of Mount Lebanon had every chance on his side since he could observe closely the critters of his own orchard. He picked the fruits he suspected of containing worms and kept them in jars to wait for their metamorphosis into adults. He then noted everything he saw (date of laying, period of metamorphosis, date of release of adults …) and persisted in identifying them by referring to texts borrowed from the library of the American University of Beirut ( AUB).

In the early 1930s, after being enrolled for one year at AUB, Talhouk left his studies to work for a year at the Near East Foundation Farm School in the Bekaa. It was when he took over his father’s orchard that he embarked on his life-long interest in the study of insects.
At the age of 31, after having three daughters with his wife Reda, he joined AUB to obtain a degree in biology and graduated with a BS in 1948 and an MS in 1955. He would then maintain a correspondence with the great entomologists of Europe, including the German Baudenheimer, on the stink bug (Suni) and study closely the biology of this insect that was wreaking havoc in Syria. This “promising young man” according to Baudenheimer, would meet the English Consul Wilcher, amateur collector, who  invited him for a stay of 7 months at the British Museum in London for the determination of some endemic species in Lebanon.

He retired from AUB in 1986, was named Professor Emeritus in 1988, and continued to lecture on a voluntary basis until 1990.
While at AUB Professor Talhouk engaged in a variety of research  projects dealing with the chemical control of insect pests and undertook biological and ecological studies of pests and virus transmitters. He discovered some 400 insects in Saudi Arabia that were previously unknown, and some 150 species of insects and mites new to science in Lebanon, Syria, and Saudi Arabia.

In recognition of this  achievement, one genus and twelve species from Arabia and thirteen species from Lebanon and Syria were named after Talhouk (e.g., Synopseas Talhouki and Nigilgia Talhouki) by leading world taxonomists.

Through the decades, Professor Talhouk participated in numerous international congresses, presenting papers from Florence to Moscow between 1953 and 1985.  He also visited many plant protection institutes and governmental, private, and industrial institutions throughout Europe and had been in constant demand to share his expertise with the region and the world at large.

During his career, Professor Talhouk published seventy-five scientific articles and four books. One book, The Role of Insects in the Environment: Diversity of Moths in Lebanon, appeared in Arabic (1996) and in English (1997). An enlarged revised edition of his Insects and Mites Injurious to Crops in Middle Eastern Countries was published by the AUB Press in 2002, on the occasion of FAFS’  50th Anniversary. The book was described as being the first of its kind to encompass comprehensive information for the prevention, identification, monitoring, and management of crop pests in Lebanon, Syria, Jordan, Iraq, and Saudi Arabia.

He was honored on March 8, 1988 by the Cultural Movement in Lebanon, when they held the “Dr. A. Talhouk’s Day” at the Lebanese Book Festival in Antelias.

His last book, completed in 2000, “The Night Butterflies in Lebanon” comprised four years of painstaking work to complete and highlight the morphological differences of these small creatures, “which seem identical for some but in fact are the members of several orders and families quite distinct”.

On June 26, 2002, a reception was given by FAFS in honor of Professor Talhouk in the faculty garden where he signed copies of his book. He donated the book sale proceeds to needy AUB students. He also donated his unparalleled collection of over 4000 species of insects, which he assembled between 1930 and 1998, to the Natural History Museum of AUB.
Professor Talhouk was often honored for his work. In 1963 and 1971 he received prizes in science from the Lebanese Society of Friends of the Book.

Professor Talhouk’s legacy lives on in the work of his many AUB graduate students, who are now leaders in research institutes and universities  throughout the Middle East.