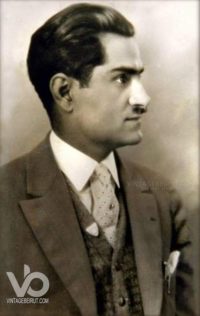 Hassan Kamel Al-Sabbah was a technological leader whose inventions in electricity had a great impact on the development of 20th century technology. In August 1921, Sabbah travelled to the U.S. to study at the Massachusetts Institute of Technology for one year. In 1922, he enrolled at the University of Illinois, where he earned a master’s degree in engineering sciences in 1923.

He was hired by the engineering laboratory of the General Electric Company (GE) at Schenectady, N.Y. in 1923. It was not long before his research efforts resulted in a number of patents. However, Sabah had signed a contract with GE whereby all his inventions became the property of the company, and so he received a reward of one dollar for each of his patented inventions. Between 1927 and 1935, he invented 52 different applications.

Hassan Kamel Assabbah (August 16, 1895 – March 31, 1935) was born in Nabatieh, Lebanon. He was an electrical and electronics research engineer, mathematician and inventor par excellence. He studied at the American University of Beirut. He taught mathematics at Imperial College of Damascus, Syria, and at the American University of Beirut.. He died in an automobile accident at Lewis near Elizabeth Town, N.Y.
In 1921, he travelled to the United States and for a short time studied at the Massachusetts Institute of Technology before joining the University of Illinois in 1923. He entered the vacuum tube section of the Engineering Laboratory of the General Electric Company at Schenectady N.Y., in 1923, where he was engaged in mathematical and experimental research, principally on rectifiers and inverters, receiving over 70 United States and foreign patents covering his work. He was engaged in work on television and motors as well, and originated circuits for use with rectifiers. He prepared a series of articles on polyphase polycyclic static converters which were published in the General Electric Review and his paper on the effect of circuits on arc backs in mercury congress at Paris in 1932. He was also on the Institute of Electrical and Electronics Engineers fellowship grade.
Mr. Assabbah’s dream was to build sun-powered cells in the Arabian desert; the main ingredients for solar power are sand (making solar cells) and strong sun (powering it). In 1935, he declared that he would return to the Middle East and transform the Arabian desert into a paradise. (He was talking about using the desert to make and power the solar cells and thus producing enormous amounts of energy).
Mr. C.G. Marcy, the personnel director of General Electric Company, used these words to describe Hasan Kamel Assabbah in a letter dated April 16, 1935:
“It is indeed unfortunate that his genius mind should be brought to such an untimely end. His death is a great loss for the world of invention”
He is the nephew of prominent linguist and writer Sheikh Ahmad Reda.

Discoveries and inventions
It is necessary to show the application and technical importance of how Hasan Kamel Assabbah’s inventions and patents have contributed to applied technology in North America and the entire world. These patents of highly intricate systems, instruments and equipment can be classified in six main groups as follows:

Space Industry (Solar power)
There are 27 patents (1928-35) of Hasan Kamel Assabbah applied in space industries. Solar cells have been widely used for space vehicles and satellites as the main source of power. The original solar cell was invented and tested by Mr. Assabbah in 1930; solar power is by far the cleanest and safest source of energy. The solar cell was further developed after World War II by Bell Telephone Laboratories in 1955. Careful review of the aircraft, spaceship, and satellite electric systems revealed that many electronic instruments and equipments (integrators, regulators, inverters, timers, transmitters, and sensors) are major components of the assembly of these crafts and are developed from Mr. Assabbah’s original inventions of rectifiers and converters.

Automotive Industry (The Solar Electric Car)
There are five basic patents (1929-35) on electric distribution, transforming and translating circuits. In 1930, Assabbah performed experiments on his own car to electrify it. He worked seriously to make the idea of the electric car a useful and practical possibility. His early experiments gave GE the unique position as a pioneer in developing the solar cell and sodium-sulphur battery as well. With increasing shortage of liquid fuel, battery-powered electric cars will become attractive for personal transport in and around towns.

Television and Cathode Ray Tube Application
There are three patents on television-transmission of pictures and views (1928-30) and two patents on cathode ray tube (1935). GE research engineers at Schenectady N.Y. developed the liquid crystal display (LCD) instrument system based on the original patents of Hasan Kamel Al-Sabbah. It is the world’s largest high resolution LCD panel for aircraft. It presents information in colour, and with twice the sharpness of a home TV screen. The display owes its high resolution to the large number of pixels (dots) that are activated toform an image on its screen, LCD imgaes are normally black and green filters. Further development and modifications of the Alsabbah cathode ray tube created new types of CRT used in electronic systems.The television would not have been discovered without this.

Power Generating Station
It is important to note that six patents (1929-35) dealt with Rectifying and Rectifier Compounding systems. Another 24 patents (1930-30) dealt with electric power conversion and excitation systems. Hasan Kamel Assabbah established in the early Thirties the basic techniques for many applicable procedures for the protection of the excitation transformers over current and rotor over voltage/load. He left after his death a great technical legacy of useful methods, procedures and formulas. All his procedures are presently used by GE’s commissioning and operation department and totally or partially adopted and further developed by the other electrical power equipment manufacturers. GE engineers recently developed several electronic equipments based on the original patents of Hasan Kamel Assabbah. Among the new devices are the metal-oxide semiconductor field-effect transistor (MOSFET), the conductivity modulated field-effect transistor (COMFET), the high-power bipolar junction transistor (HPBJT), the power MOS-controlled thyristor (PMOSCT) and the HVDC thyristor valves. When he was young, he said to his mother if the streams of the radio work, what if we put a screen over that and the streams will be the same but we will see a picture!! The Television wouldn’t have been made with out him.

Heavy Industry: Development of New Arc Welding Methods
There are basic patents on vapour electric arc (1928-30), in addition to the six patents on rectifying and rectifiers (1928-35). These inventions are the cornerstone of the arc-welding machines. The Assabbah rectifying system was further developed by GE. The GE AC/DC transformer/rectifier was introduced to the market in 1930. This transformer/rectifier was the essential part of the shield metal arc welding (SMAW) machine in 1936 and Mr. Hopkins developed the electro slag welding (EW) machine in 1937. The heavy industry (ships, submarines, tanks and turbo-generators) could not progress without the development of the new arc welding machinery. In the early years of the Second World War, many welding machine manufacturers further developed the welding machine to meet the military industry requirements by using the rectifying system of Mr.Assabbah.