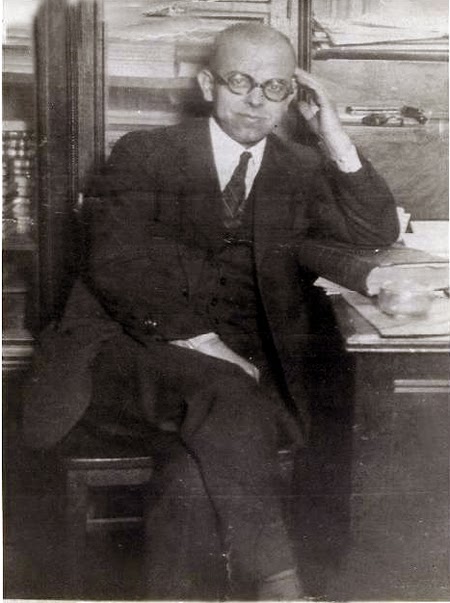 Elia Abu Madi  (Arabic: إيليا أبو ماضي‎)  (15 May, 1890 – 23 November, 1957) Born in the village of Al-Muhaydithah, now part of Bikfaya, Mount Lebanon,  Abu Madi moved to Alexandria, Egypt at the age of 11, where he worked with his uncle. In 1911, he published his first collection of poems, Tazkar al-Madi. Shortly after, he was exiled by the Ottoman Turkish authorities and  left Egypt for the United States, where he settled in Cincinnati, Ohio. In 1916 he moved to New York and began a career in journalism. In New York, Abu Madi met and worked with a number of Arab-American poets in the Pen League (Al-Rabita al-Qalamiyah, known more familiarly as Al-Mahjar) including Kahlil Gibran, Ameen Rihani and Mikhail Naimy. He married the daughter of Najeeb Diab, editor of the Arabic-language magazine Meraat ul-Gharb, and became the chief editor of that publication in 1918. His second poetry collection, Diwan Iliya Abu Madi, was published in New York in 1919; his third and most important collection, Al-Jadawil (“The Streams”), appeared in 1927. His other books were Al-Khama’il (“The Tickets”) (1940) and Tibr wa Turab (posthumous, 1960). In 1929 Elia Abu Madi founded his own periodical, Al-Samir, in Brooklyn. It began as a monthly but after a few years appeared five times a week. Al-Sameer, one of the longest-running Arabic newspapers in the US, contained news and articles on the Arab community in America in addition to international news. Abu Madi wrote all the editorials. It ceased publication in 1957, the year of Abu Madi’ s death. Unlike Gibran and Rihani, Elia Abu Madi did not attain his deserved recognition in the US. His works were barely translated even though he was considered the most capable and sublime of the “al-mahjar” writers. His topics spanned themes from love to war. Like other writers of his group, he was strongly philosophical and political.