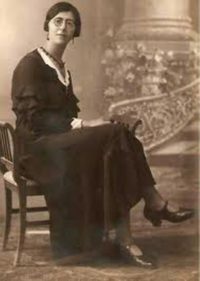 May Ziade (Arabic: مي زيادة‎) (née Marie, with Ziade also written Ziadé, Ziyada or Ziadeh) (11 February, 1886 – 17 October, 1941) was a Lebanese-Palestinian poet, essayist and translator. She studied in Antoura, before moving to Cairo where she hosted the most famous literary salon of the Arab world during the ’20s and ’30s. She was considered a “pioneer of Oriental feminism”, revered by leading intellectuals. Ziade never married, but enjoyed a “relationship of letters” for almost 20 years with the famous Lebanese poet Kahlil Gibran, although they never met. Between 1930 and 1932, May suffered a series of personal losses – the death of her parents and above all, her beloved Gibran. She fell into a deep depression and returned to Lebanon where her relatives placed her in a psychiatric hospital to gain control over her estate. A press campaign instigated by the Lebanese writer Amin Rihani proved crucial in freeing May from the mental institution. She was eventually able to leave and returned to Cairo where she died on October 17, 1941.