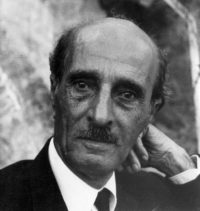 Mikhail Naimy (Arabic: ميخائيل نعيمة‎)  (17 October, 1889 –  28 February, 1988). A poet, novelist and philosopher, this Baskinta-born Lebanese author was famous for his spiritual writings, notably “The Book of Mirdad: The Strange Story of a Monastery Which Was Once Called the Ark” (1948). He is widely recognized as one of the most important figures in modern Arabic letters and one of the most important spiritual writers of the 20th century. He wrote 99 books, including drama, essays, poetry, criticism, short stories and biography. Naimy completed his secondary education in Baskinta, studied at the Russian Teachers’ Institute in Nazareth and the Theological Seminary in Poltava, Ukraine. In 1911, he moved to the United States where he received degrees in Law and Liberal Arts at the University of Washington. After graduation he moved to New York, where along with Khalil Gibran and eight other writers (including Elia Abu Madi and Ameen Rihani) he re-established a movement for the rebirth of Arabic literature, the New York literary society known as the Pen League. He was the Vice President and Gibran was President. The primary goals of The Pen League were, in Naimy’s words as Secretary, “to lift Arabic literature from the quagmire of stagnation and imitation, and to infuse a new life into its veins so as to make of it an active force in the building up of the Arab nations”, and to promote a new generation of Arab writers. In 1932, having lived in the US for 21 years, he returned to Baskinta, where he lived for the rest of his life. In 1934, he penned the first biography of Gibran. He died of pneumonia in Beirut at the age of 98. The mystic Osho said this of The Book of Mirdad: “There are millions of books in the world, but The Book of Mirdad stands out far above any book in existence”.