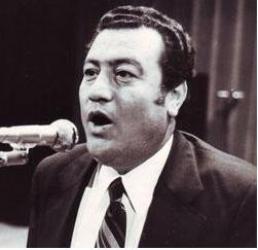 Khalil Chahrour (Arabic: خليل شحرور‎) (1940– ). He grew up in the village of Chour (near Tyr). Khalil Chahrour’s first live concert was in 1959 at the age of 19 – performing at the Tanios Hotel in Aley, with Mohamed Mahmoud El-Zein, Ra’at Mubarak from Baalbek and Ahmed Mohammed Shoaib from the town of Sharqiya, south Lebanon. He sang with many high-level choirs such as “The Technical Team” with Tanios Al-Hamlawi, “Kholoud El Fan” with Mohamed Mustafa, and performed concerts with Gerges Al Bustani, Talih Hamdan, Zaghoul al-Damour, Zein Sheib, As’ad Saeed and even Khalil Roukoz. He was known as a politicised poet – this color imposed itself on him from the start of his career. In 1983, he managed with a group of poets to obtain a license to establish a syndicate of poets in Lebanon. The first general assembly was held in 1993. Elections were held for the board of directors and included senior figures in the world of al-Zajal in Lebanon. Khalil Chahrour was elected as the leader of the Zajal poets in Lebanon .