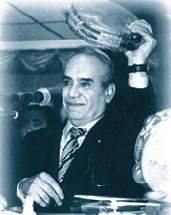 Moussa Zgheib (Arabic: موسى زغيب‎) (1937-) This famous zajal poet was born in the Lebanese village of Hrajel. He comes from a zajal family, his father and grandfather before him performing this art of improvised poetry. By the age of 15 , he was reciting alongside his father. He started as a companion to Khalil Roukoz and remained the poet’s companion until the death of Roukoz in 1962. He then took over leadership of the Khalil Roukoz Troupe, changing its name to the “Castle Chorus”. Moussa Zgheib is considered one of the strongest challengers in the games between the Zajal teams in Lebanon, often competing fiercely with  Zaghloul al-Damour and Zein Sheib. In recognition of his efforts and distinguished poetry, the Lebanese government awarded him the Lebanese Order of Merit in 1973, “for spreading the message of the Lebanese heritage in Lebanon and all countries of association.”