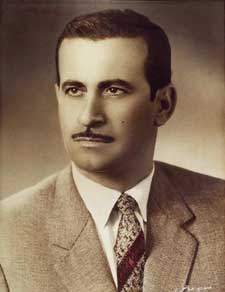 Zein Sheib (Arabic: زين_شعيب‎) (1922 – 10 April, 2005). Also known as “Abu Ali”, he was born in the town of Al- Sharqiya (from the villages of Jabal Amel). In the 1950’s he founded جوقة الجنوب العاملي (The al-Janoub al-Amili Zajal Troupe) together with Khalil Roukoz and عبد الجليل وهبي (Abdel Jalil Wahbi). Later he moved to Beirut where he joined Joseph Al-Hashem جوقة زغلول الدامور (The Zaghloul al-Damour Troupe) and remained a pillar in this choir until the end of his life. He became famous in the Zajal parties in Lebanon and abroad, and was famous for his ability to improvise. His activities ranged from concerts in Lebanon to television and radio, and traveling in the Diaspora between the Lebanese expatriates. His poems varied between nostalgia and patriotism, as well as the pain and hopes of his people. He received many honours in his life and after his death, including:
1974 – Medal of Merit from the President of the Republic.
1995 – Medal of Merit from the Lebanese Ministry of Culture.
1996 – Nabih Berri awarded him the Order of the South.
1997 – Lebanese President Elias Hrawi named him Knight of the National Cedar Medal.
2002 – crowned by President Rafic Hariri as the shield of the giants of the East.
After his death, Lebanese President Emile Lahoud awarded him the Silver Cedar Medal in honor of his memory.